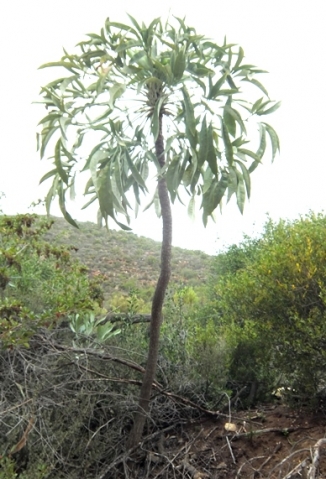 Its bark is thick and corky, grey-brown in colour and longitudinally fissured, the main stem becoming thick. The flowers are small, green and stalked, growing in dense spikes arranged in branched, terminal inflorescences. Small, globose fruit follow, purple and fleshy, crowded in the spikes and eaten by birds.

The subspecies distribution is in the Western and Eastern Cape, southern KwaZulu-Natal; also into the Northern Cape. The plant, a South African endemic, grows on dry stony slopes. It is not considered to be threatened in its habitat early in the twenty first century.

This young tree was seen in April in the Bo-Kouga, north of the western part of the Langkloof (Coates Palgrave, 2002; iSpot; www.redlist.sanbi.org).