Home » GENERA C » Cussonia » Cussonia natalensis
Back to Category Overview
Total images in all categories: 11,037
Total number of hits on all images: 5,688,334 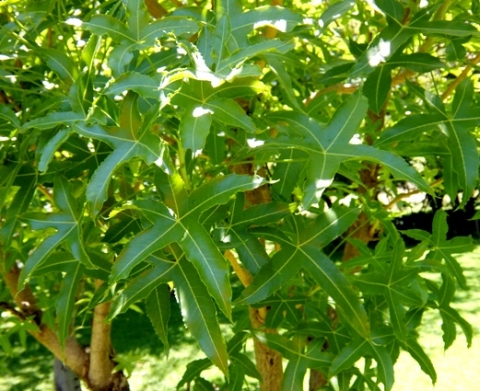 Cussonia natalensis, the rock cabbage-tree, is a small, thickset, deciduous tree growing a rounded crown to 10 m in height (SA Tree List No. 562).

The flowers are greenish yellow. They radiate from thickened side-shoots at branch tips in clusters of up to twelve cylindrical spikes, each about 15 cm long and 1,5 cm in diameter. The fruits, fleshy, globular drupes of 6 cm in diameter appear crowded on the spikes from winter to spring, sometimes midsummer. The fruits are initially orange, later purple upon ripening, eaten by birds.

C. natalensis is only found in the north-eastern parts of South Africa, in the north of KwaZulu-Natal, Mpumalanga and Limpopo. It also grows in Zimbabwe, Swaziland and Mozambique.

The habitat of the species is rocky slopes and bushveld. The species is not considered to be threatened in its habitat early in the twenty first century (Coates Palgrave, 2002; Pooley, 1993; Schmidt, et al, 2002; www.redlist.sanbi.org).