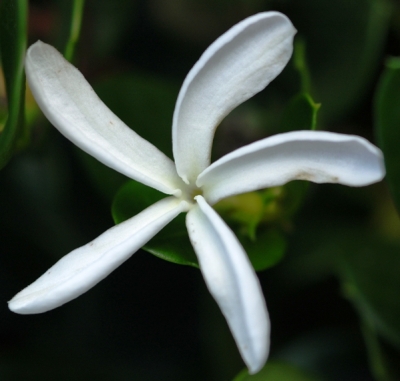 Carissa is a genus of shrubs, small trees or scramblers in the Apocynaceae or milkweed family. The plants are armed, the opposite spines sometimes stout and dichotomously forked. The plants contain a milky latex.

The simple, opposite leaves are stalked and without stipules. Leaf-shapes are broadly ovate to ovate-lanceolate, the blades leathery and the margins entire.

The fragrant, bisexual and short-stalked flowers grow at stem-tips, also apparently axillary, as some become positioned in axils from the continued development of lateral branchlets in the inflorescence (pseudo-axillary). The densely grouped flowers form umbels or corymbs, rarely a cyme.

The small calyx usually has five green lobes divided to near the base. The salver-shaped corolla has a cylindrical tube that is sometimes hairy in the throat. The usually five lobes spread, overlapping clockwise or anticlockwise. The corolla is white, occasionally tinged pink.

The five stamens are included in the corolla tube that may bulge where they are positioned. The entire or undivided ovary has two locules, each usually harbouring only one to four ovules. The fleshy fruit to follow the flower is a globose to oblong berry.

The genus comprises about 20 species in tropical Africa, warmer parts of Australia and Asia, as well as some Indian Ocean islands, including Madagascar.

All four the Carissa species occurring in South Africa are commonly called num-num. There used to be more, but C. haematocarpa and C. wyliei now form part of C. bispinosa, the locally most widespread species. C. praetermissa is now a synonym of C. macrocarpa.

Children, birds and some animals eat the num-num fruit. The fruit of some species, like the purple- or black-fruited form of C. bispinosa, previously C. haematocarpa, stain teeth blue or black. One notable Carissa-eating animal is the black rhinoceros, the fruits only part of the intake.

The plants are popular among gardeners for their looks, their fruit and the ease of their cultivation. Jellies and jams are made, or used to be made of the fruits (Leistner, (Ed.), 2000; Coates Palgrave, 2002; Van Wyk and Van Wyk, 1997; Pooley, 1993; iNaturalist; http://redlist.sanbi.org).