Home » GENERA C » Carissa » Carissa bispinosa pale in the Karoo
Back to Category Overview
Total images in all categories: 11,656
Total number of hits on all images: 6,771,017

Carissa bispinosa pale in the Karoo 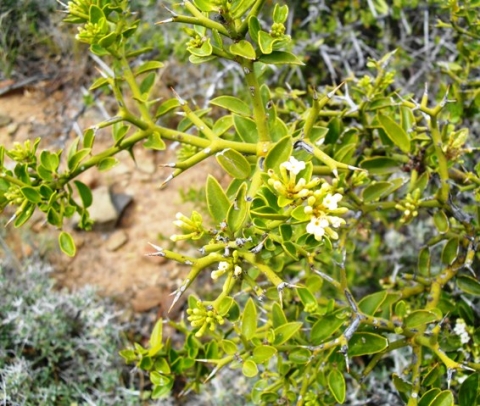 This Carissa bispinosa, previously known as C. haematocarpa, growing in the Karoo National Park near Beaufort West, shows how hard life can be in this arid setting. Where life is easier, it may become a small tree of 4 m to 5 m.

The photograph was taken late in October when the hot season is not yet at its peak. Signs of thirst are clear to see in the dried spines and the general yellowish colour. Still, the plant manages to produce a fair flourish of flower clusters, showing resilience.

One should not underestimate the capacity of established local plant communities. Bigger Karoo shrubs like this one are often bolstered by long taproots that may reach deep-seated moisture supplies, well hidden from the sun.

There also used to be a C. bispinosa subsp. bispinosa, no longer upheld. Some smaller plants used to be separated on account of twice-forked spines or red fruit instead of (smaller) black ones (Coates Palgrave, 2002; http://redlist.sanbi.org).