Home » GENERA B-C » Carissa » Carissa haematocarpa
Back to Category Overview
Total images in all categories: 9,769
Total number of hits on all images: 4,389,197 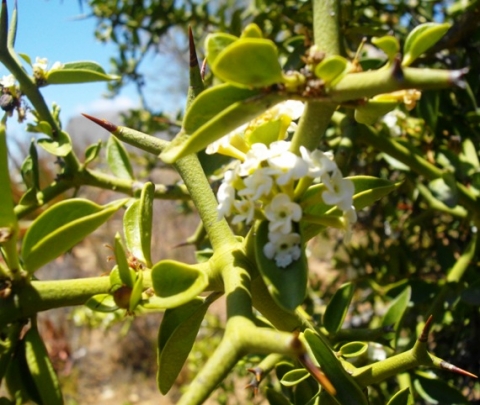 Carissa haematocarpa, the Karoo num-num, is a small tree or shrub of up to 3 m, with large numbers of stout, forked thorns (SA Tree List No. 640.2). It appears as if C. haematocarpa has been sunken into C. bispinosa.

The leaves are hard, olive-green, ovate or elliptic and leathery. The bark is green and wrinkled. The flowers are small, white, with corolla tubes of 7 mm and broad, short corolla lobes overlapping to the left. It blooms in spring and summer and the flowers are heavily scented. The ripe fruits are black and much eaten by birds.

It is found mainly inland in the Western and Eastern Cape Karoo type vegetation. It also grows in the Richtersveld and adjacent southern Namibia. The species is not considered to be threatened in its habitat early in the twenty first century (Coates Palgrave, 2002; JSTOR; www.redlist.sanbi.org).