Home » GENERA C » Carissa » Carissa bispinosa
Back to Category Overview
Total images in all categories: 11,656
Total number of hits on all images: 6,771,285 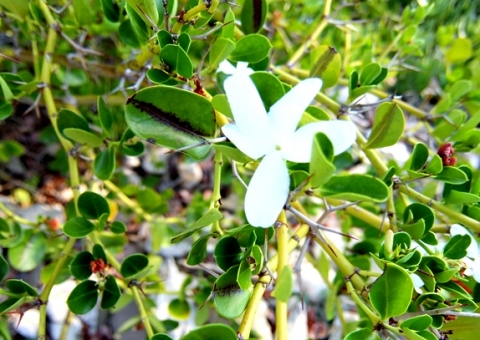 Carissa bispinosa, the common num-num, is a spiny evergreen shrub, sometimes a scrambler. Occasionally it becomes a small tree of up to 5 m in height, commonly less than half that (SA Tree List, 640.1).

The bark on the much-branched stems is initially green, becoming partly grey and wrinkled. Forked spines are conspicuous upon the stems. The plant exudes a milky latex when the skin is damaged. This is a heterogeneous species of varied appearance.

The photo was taken near the Seweweekspoort where C. bispinosa as well as C. haematocarpa used to be the possible naming verdict, but since the sinking of C. haematocarpa into C. spinosa, the problem of distinguishing between the two is something of the past.

Those who knew the different forms well, sometimes take their time in adapting to such a name change. It's harder to deal with new names or additional ones when separations occur. Speciation is all about splitting, but when to agree that it should be official is always a talking point.

Appearance differences between plants occur in continua and increase with new adaptations for survival in more ecological settings. The human decisions of separating living things into more categories, as reflected in official nomenclature inevitably multiply the grey areas of uncertainty.

The species distribution of C. bispinosa is widespread through the southern, eastern and north-eastern parts of South Africa, as well as in several African countries. It grows in all South African provinces with the possible exception of the Free State. The plants found in the Richtersveld extend into the adjacent southern Namibia.

The habitat includes dry woodland, forest, bushveld and coastal scrub, also along forest margins and the under-storey of evergreen forests. The species is not considered to be threatened in habitat early in the twenty first century (Coates Palgrave, 2002; Van Wyk and Van Wyk, 1997; Pooley, 1993; www.redlist.sanbi.org).