Home » GENERA B » Brownleea » Brownleea galpinii spotted flowers
Back to Category Overview
Total images in all categories: 11,104
Total number of hits on all images: 5,771,796 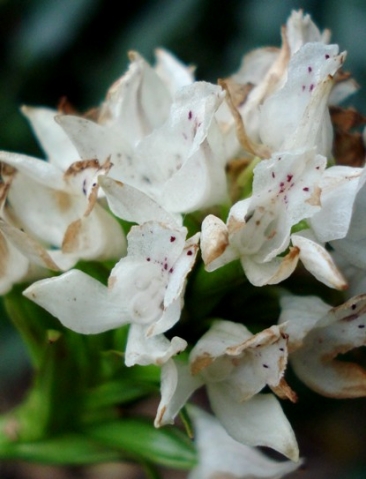 The flowers of Brownleea galpinii grow in a compact, hemispherical to capitate or head-like inflorescence, unlike the other seven members of this genus that grow oblong, sometimes lax, elongated spikes.

This difference has come about from the plant’s mimicry of Scabiosa flowers of its habitat. Being a nectar-producing species needing services from the insects frequenting the more numerous Scabiosa flowers around it, B. galpinii morphed into a shape resembling Scabiosa, achieving the deceptive resemblance required for its survival. B. galpinii is pollinated by flies with short proboscises.

The flowers are often positioned only on one side of the stem. The lance-shaped floral bracts may be longer than the ovaries. The flowers are cream or white, sometimes with purple spots on the upper (inner) surfaces of the petals that are positioned next to the median sepal, the hood. The median sepal is helmet-shaped, erect and 2 mm deep. The spur is straight, parallel to the ovary. The lateral sepals are slightly oblique in shape. The lip is tiny and erect in front of the column.