Home » GENERA A » Acmadenia » Acmadenia mundiana
Back to Category Overview
Total images in all categories: 9,976
Total number of hits on all images: 4,685,539 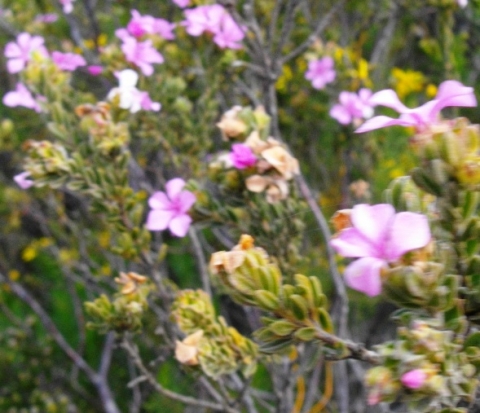 Acmadenia mundiana, previously known as A. cucullata, is a single-stemmed, much branched shrub that reaches about 1,2 m in height. The leaves are small, oblong or elliptical and less pressed to the stem than on some of the other Acmadenia species.

The flowers of A. mundiana are five-petalled and star-shaped. There is a fine, dark pink line called a nectar guide, a route map enticing visiting pollinators to move along the centre of each petal into the throat of the flower.

The species is endemic to a limited area of limestone outcrops near the sea from Agulhas to the De Hoop Nature Reserve south of Swellendam in the Western Cape where the photo was taken. Considered rare due to its range-restricted distribution, the species is not considered to be threatened in its habitat early in the twenty first century.

Buchu is a common name for a group of plants belonging to the Rutaceae (Citrus) family. The family includes the genera Acmadenia and Agathosma that comprise well-known buchu plants, widely used in traditional medicine. The most famous buchu medicine probably comes from Agathosma betulina, another Western Cape species. The Acmadenia genus is commonly known as duineboegoe in Afrikaans (dune buchu) (Manning, 2007; http://redlist.sanbi.org).