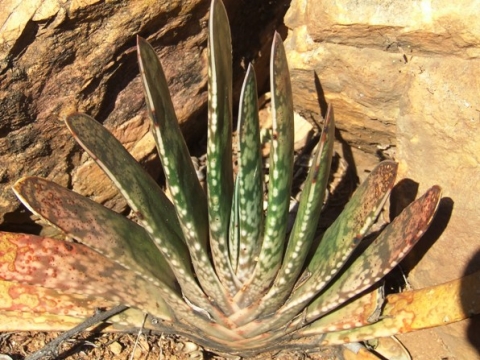 Previous
Image 4 of 29
Next

Called ruigtebeestong (brushwood cattle-tongue, referring to the leaf shape) in Afrikaans, this plant commonly grows under or close to shrubs that provide some shade and protection in its natural habitat. It doesn't mean that the seed picks its spot, but that the surviving plants are those enjoying sufficient benefits to survive life's early challenges.

The leaves are lavishly mottled or dotted with unevenly grouped and banded white markings. Young green leaf areas contrast against the reddish brown that begins in the outer parts, also the yellow of old leaves already dying off; in all the fan of leaves is a colourful affair, also when no flowers are present.

Note the geometric pattern of the leaf bases where they join. This species lacks the leaf keel or ridge on the outer surfaces found on the some other Gasteria species.