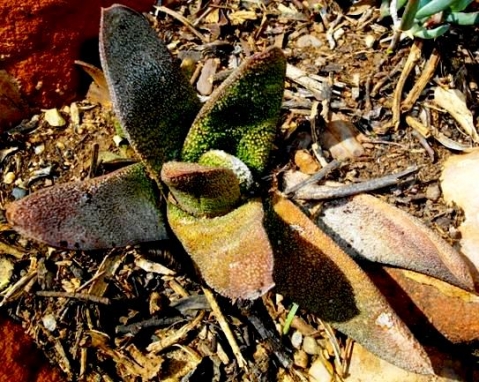 Previous
Image 3 of 29
Next

Gasteria batesiana var. batesiana is but one of the sought after attractions from this variable species found in the specialised market, not so much in the veld. It comes from the Barberton area in Mpumalanga, sadly only known in cultivation today. The other varieties of G. batesiana also occur in this north-eastern region of South Africa, viz. northern KwaZulu-Natal and parts of Mpumalanga and Limpopo. In habitat the plant mainly grows on steep rocky slopes and bushveld cliffs.

G. batesiana var. batesiana is characterised by its dark, blackish-green triangular-lanceolate leaves. As can be seen in the picture, the leaves are finely and densely tuberculate. Some of the other recorded variaties, like var. dolomitica and cultivars Mzimduzi and Pongola, have smooth or almost smooth leaves (www.plantzafrica.com).