Home » GENERA G-H » Gasteria » Gasteria batesiana in the Walter Sisulu National Botanical Garden
Back to Category Overview
Total images in all categories: 9,913
Total number of hits on all images: 4,614,394 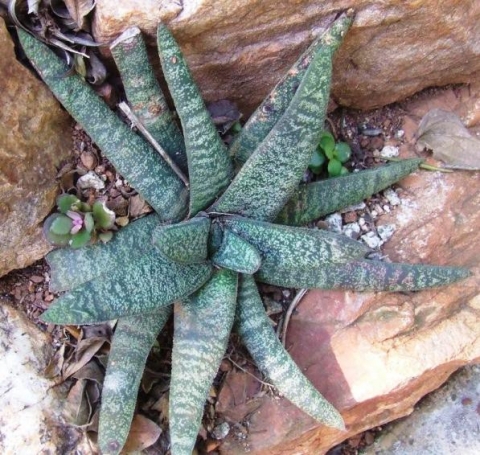 Previous
Image 2 of 29
Next

Gasteria batesiana is one of the smaller species of its genus, the only one occurring in South Africa north of the Vaal River. Botany Professor, Gordon Rowley, named the species after Mr Bates, a London trolleybus conductor, who collected and planted many succulents, also for N.E. Brown, a Kew botanist.

Its attractively tubercle-spotted leaves, in this case forming a rosette, are typical of Gasteria. Leaves of this species are more often distichous (arranged in two opposite, vertical arrays) than rosulate (in a rosette).

The leaves are dark green, thickly succulent, triangular in cross-section and lanceolate with an off-centre keel on the lower surface. Transverse rows of irregular markings, the tubercles, are spread over all leaf surfaces.

The tubular perianth of its flower has less of the basal swelling typical of Gasteria. Flower shape in this genus resembling the human stomach, brought about the name Gasteria.

Gasterias are related to the aloes and the haworthias, all belonging to the Asphodelaceae family and all well established in the gardening world. Identification is often complicated by the natural (and deliberate horticultural) hybridisation among species (Hardy and Fabian, 1992).