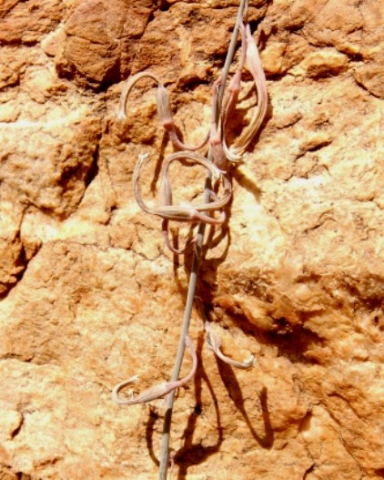 Previous
Image 1 of 29
Next

These Gasteria batesiana flowers against a rock are already halfway transformed into fruits in mid-January. Shrivelled perianth tubes, when in full bloom up to 4 cm in length, still show a hint of the pale pinkish colour they had near the base in their heyday. The greenish lemon yellow of the upper perianth halves is fully lost now.

The slight bulges at the bases of the perianths are growing as the ovaries swell into fruit size, a little later to burst the desiccated perianth walls. The flowers usually grow in a single raceme, only occasionally branching. The raceme reaches lengths from 30 cm to 45 cm.

Individual flowers droop from pedicels of about 9 mm long. A flower at its peak has its stamens slightly exserted, the stigma only sometimes. Flowering happens from mid-spring to early summer.

The three-segmented fruit capsule becomes about 2 cm long. The ripe seeds are many, flattened and black (www.plantzafrica.com).