Home » GENERA G-H » Gasteria » Gasteria acinacifolia
Back to Category Overview
Total images in all categories: 9,390
Total number of hits on all images: 4,217,924 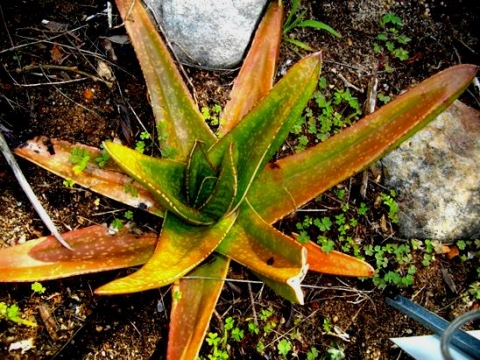 Gasteria acinacifolia, in Afrikaans commonly known as bosaalwee (bush aloe), is a leaf succulent that grows solitary rosettes or occasionally forms clumps, reaching 15 cm in height. Although Gasteria forms part of the Aloe family, Asphodelaceae, the common name of this plant suggests an Aloe resemblance in its spiralling leaf rosettes and flowers.

The rigid leaves are lance-shaped and angled. The leaf colour is dark green near the base and on new growth, yellowish to orange-red in the upper parts. Small, whitish spots are scattered on all leaf surfaces. Leaf margins are sharp and smooth, slightly cartilaginous.

The specific name, acinacifolia, is leaf descriptive, referring to its pointed scimitar-shape; acis being a point or barb in Greek, -aceus indicating resemblance (Latin) and forma meaning form or shape, (also Latin).

The species distribution is a narrow coastal strip in the Eastern Cape between Knysna and East London. The plants grow on sand dunes, usually obscured by bigger plants of the scrub vegetation. The plant is not considered to be threatened in its habitat early in the twenty first century (Frandsen, 2017; Smith and Crouch, 2009; Andrew, 2012; Bond and Goldblatt, 1984; www.redlist.sanbi.org).