Home » HABITAT » Fynbos » Nivenia corymbosa
Back to Category Overview
Total images in all categories: 9,840
Total number of hits on all images: 4,466,085 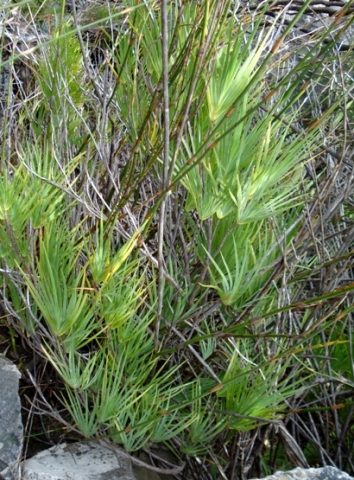 This Nivenia plant bearing only leaves at the time, was seen in Bainskloof east of Wellington during October. The most likely species occurring so far west is Nivenia corymbosa. The ten species of Nivenia all grow in fynbos on Western Cape mountains. A couple of them are found to the east, on the Swartberg in the Little Karoo.

N. corymbosa, sometimes called the woody iris, is a shrub reaching heights from 50 cm to 2 m. Its leaves are sword-shaped, produced in fans. Some bare grey woody stems are visible below the leaf fans in the photo.

Long-tubed flowers in variable shades of blue are produced in branched clusters from late spring to early autumn. The flowers are heterostylous, that means although all the flowers on one plant will be structurally the same, different plants will bear flowers with pistils and stamens of varying length; without continuity between the lengths seen. These differently adapted plants capitalise on the services of different pollinators or different body parts of the same pollinator.

The species distribution lies in the mountains between Wellington and Tulbagh. The habitat is rocky sandstone slopes along streams and drainage lines. The species is not considered to be threatened in its habitat early in the twenty first century (Manning, 2007; Bond and Goldblatt, 1984; iSpot; Wikipedia; http://redlist.sanbi.org).