Home » HABITAT » Fynbos » Lanaria lanata flowering in wool
Back to Category Overview
Total images in all categories: 10,212
Total number of hits on all images: 4,867,263 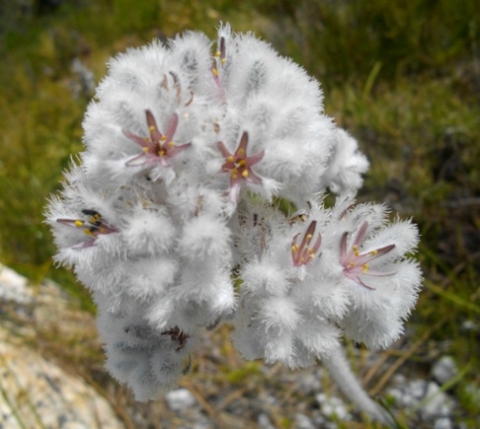 The woolly, rounded panicle of Lanaria lanata, commonly known as the Cape edelweiss or lambtails, consists of small, mauve-pink flowers, white-haired on the outside. Six narrow tepals form the flower funnel; their spreading tips are oblong.

The yellow-anthered stamens, also spreading, are visible on the flowers in the photo. There are six stamens per flower, distinguishing the plant from Haemodoraceae flowers that have three only. The white stigma in the centre has three branches (Vlok and Schutte-Vlok, 2010; Manning, 2007; Wikipedia).