Home » HABITAT » Fynbos » Lanaria lanata flower beginnings
Back to Category Overview
Total images in all categories: 10,212
Total number of hits on all images: 4,867,393 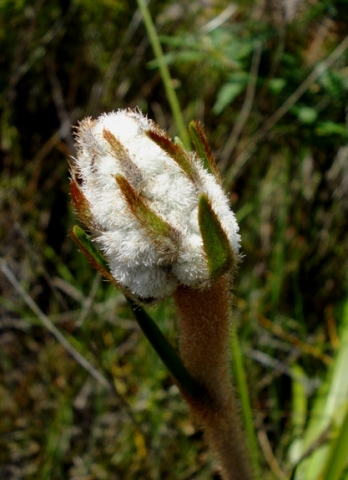 This early stage of a Lanaria lanata inflorescence still has all its flowers compactly together, covered in wool. The thick flowering stalk has a few small, widely spaced leaves up its hairy surface. Narrow, tapering bracts, also hairy, emerge from the woolly mass. These bracts will later subtend the different branches of the panicle in bloom, inconspicuously spaced among much wool and some flowers.

An unusual plant, the species is monotypic, i.e. it is the only member of the Lanaria genus. This genus is also monotypic, alone in its family, the Lanariaceae, created to “house” it botanically.

The species, genus and family are thus, individually and severally, endemic to fynbos in the southern parts of South Africa, where “they” are thriving in our too frequently burned veld. The species is not considered to be threatened in its habitat early in the twenty first century (Bean and Johns, 2005; Manning, 2007; Wikipedia; www.redlist.sanbi.org).