Home » HABITAT » Fynbos » Lanaria lanata
Back to Category Overview
Total images in all categories: 9,574
Total number of hits on all images: 4,303,505 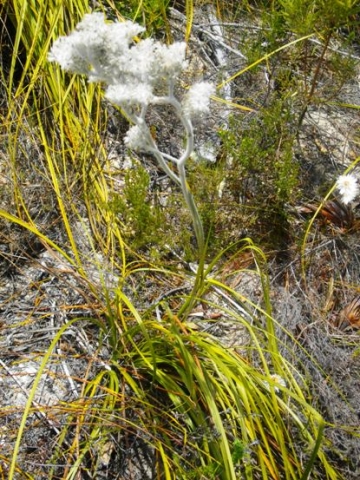 The perdekapok (horse snow) flowers profusely in summer after fires. It grows on mountain slopes along the south coast of the Western and Eastern Cape, from Bainskloof to Grahamstown. How Lanaria lanata acquired the common name of perdekapok in Afrikaans is only simple to deduce as far as the snow part is concerned. Maybe people from the horse world can shed light on the other part. The thick black rootstock ensures survival of the plant during fires. High incidence of these plants indicates too frequent burning of the veld (Vlok and Schutte-Vlok, 2010; Bean and Johns, 2005).

The plant is the only one in both its genus and family, i.e. genus and family are both monotypic. Do such genera and families display strong and broadly functional adaptation to survive with no speciation or extinction required, amid much evolutionary activity around them? Displaying a resolute sense of identity, fortitude or "strength of character" while vacillating neighbours hedge their survival bets as widely as possible? Or is it weakness? Or of no consequence?