Home » HABITAT » Fynbos » Hypodiscus aristatus, a male plant
Back to Category Overview
Total images in all categories: 8,892
Total number of hits on all images: 3,866,590 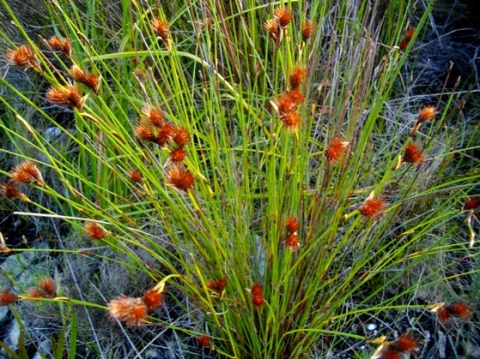 Hypodiscus aristatus grows a tuft of unbranched culms from a short rhizome to heights ranging from 30 cm to 1,2 m. The plants resprout after fire. The culms are smooth, the sheaths around them tightly or loosely wrapped.

The groups of spikelets at stem-tips are spindle-shaped, up to 2 cm long. The bristly red-brown flowers in picture are male, the bracts longer than the spikelets and bony. Male and female flowers grow on different plants.

The species distribution is from Clanwilliam and the Cape Peninsula in the Western Cape to Baviaanskloof and Humansdorp in the Eastern Cape. The plants grow on rocky slopes in well-drained sandy soils. The species is not considered to be threatened in its habitat early in the twenty first century (Dorrat-Haaksma and Linder, 2012; Bean and Johns, 2005; iSpot; www.redlist.sanbi.org).