Home » TYPES » Ferns » Schizaea pectinata sporangia are in these comb-like structures
Back to Category Overview
Total images in all categories: 11,933
Total number of hits on all images: 7,175,152

Schizaea pectinata sporangia are in these comb-like structures 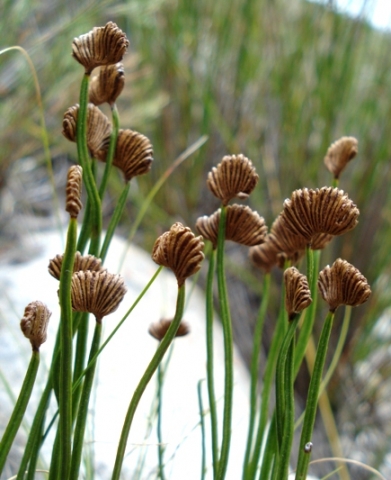 The slender, hairless fronds of Schizaea pectinata are erect up to their horizontally bent tips, each subtending a fan-like or comb-like row of erect brown divisions. The sporangia of this fern are found on the inner surfaces of these brown slices that start off yellowish green. The flat little slab structures are borne closely together.

The Schizaea genus comprises 30 species. S. tenella also found among the fynbos, grows near streams and has fewer divisions in its "combs" (Manning and Goldblatt, 1996; Bean and Johns, 2005; Privett and Lutzeyer, 2010; iSpot).