Home » TYPES » Ferns » Rumohra adiantiformis in a comfortable spot
Back to Category Overview
Total images in all categories: 10,335
Total number of hits on all images: 5,029,741 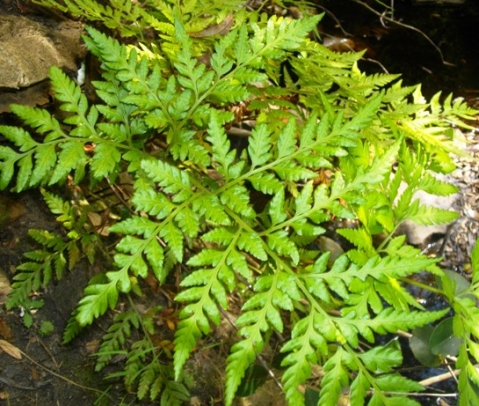 This young, lacy frond of Rumohra adiantiformis was seen in Fernkloof at Hermanus among rocks by a stream. Preferring damp, shady spots, the plant has made most of such opportunities in many parts of the world; admired wherever it takes root. The habitat is characterised by trees and boulders where it can hide from wind and full sun that would dry it out. Dappled sunlight is ideal.

The glossy, leathery fronds are three or four times divided in its characteristic pinnate shape. The reddish, scaly rhizome creeps along the ground where the moisture is found to produce more fronds. Its sori are circular, about 2 mm in diameter. The Cape form of this species is said to reach above average sizes.

For a world citizen known to many, R. adiantiformis has a curiously vague family pedigree: some place it in the Dryopteridaceae family, others in Elaphoglossaceae. Broadly speaking it is clearly a pteridophyte, a vascular plant reproduced and dispersed by spores (Bean and Johns, 2005; Wikipedia; www.forestferns.co.za).