Home » TYPES » Ferns » Rumohra adiantiformis
Back to Category Overview
Total images in all categories: 11,921
Total number of hits on all images: 7,169,091 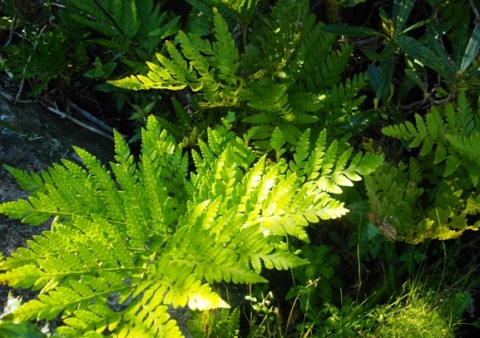 Rumohra adiantiformis, commonly the seven weeks fern, the leatherleaf fern or the Knysna fern, is a sturdy, spreading fern growing fronds from 25 cm to 1 m long. The species forms part of the Dryopteridaceae family.

The sori or reproductive clusters of spores of this plant appear on the underside of pinnae (leaflets) on all the fronds, not only on specialised reproductive fronds, as in the case of many other ferns. The sori are circular, about 2 mm in diameter.

The species distribution is as widespread as Europe, Africa, South America and Australia, mainly in the Southern Hemisphere. In South Africa the plant grows along the south and east coasts in the Western and Eastern Cape and KwaZulu-Natal, as well as in parts of Mpumalanga and Limpopo.

The habitat is moist forest floors, the plants sometimes sheltered by boulders near water. The species is not considered to be threatened in its habitat early in the twenty first century.

This is a sought-after species among florists valuing the long-living, deep green fronds that do not wilt. It is a hardy plant that succeeds in shade or semi-shade spots of well-watered gardens, also in hanging baskets (Bean and Johns, 2005; iNaturalist; Wikipedia; www.plantzafrica.com).