Home » TYPES » Ferns » Ptisana fraxinea
Back to Category Overview
Total images in all categories: 11,539
Total number of hits on all images: 6,621,908 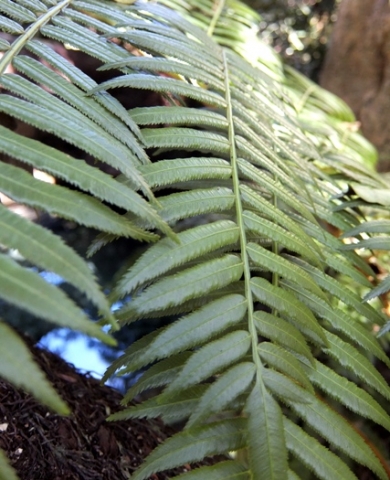 The Marattiaceae family (of which the Ptisana genus, previously Marattia forms part), includes the fern species with the biggest fronds. Many of them grow fleshy roots and are found worldwide in temperate zones; the Ptisana genus being spread across the earth in tropical and subtropical regions.

Marattiaceae is the only family of its order and even its class, having diverged early from other ferns in its evolutionary history. Not that they grew so independently and smoothly without trials and tribulations: There are many extinct species and genera in their family tree as reconstructed by botanists.

Every living thing is a monument to innumerable deaths: life is wonderful, but death is more plentiful in nature. The unrecorded chain of ancestral survival battles, forming everyone’s and everything’s lineage, stirs at the edge of the primitive part of the mind, challenging consciousness, sensing a dark unknown inside that defies recall. It all started in one continuous web of unknown dimensionality when the earth’s conditions allowed (and compelled) its surface layer to go green, to host life. We are all surrounded by relatives beyond belief.

P. fraxinea, the pitted potato fern, is distributed along the escarpment in KwaZulu-Natal, Mpumalanga, Limpopo and Swaziland. There is more, as the distribution of this world citizen extends into tropical Africa, Australia, New Zealand and the tropics of the Pacific Ocean.

Its habitat is moist, afromontane forests and riverine areas often swathed in mist. The species is not considered to be threatened in its habitat early in the twenty first century.

The specific epithet, fraxinea, is derived from the resemblance of the fronds to the leaves of ash trees of the Fraxinus genus in the Oleaceae family (Schmidt, et al, 2002; JSTOR; Wikipedia; http://redlist.sanbi.org).