Home » TYPES » Ferns » Alsophila dregei frond
Back to Category Overview
Total images in all categories: 11,528
Total number of hits on all images: 6,610,252 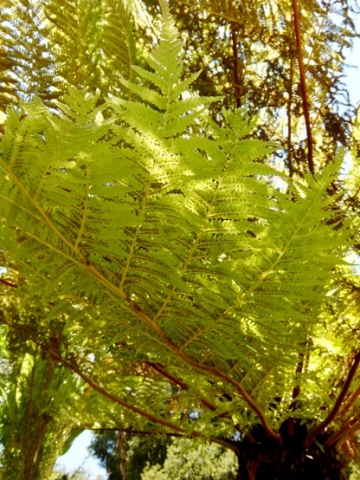 Previous
Image 5 of 40
Next

This Alsophila dregei frond was seen in the Walter Sisulu National Botanical Garden. Thrice compound (or tripinnate), the leaflets on the third level of (smallest) stalks have entire margins. This differentiates the plant from A. capensis, the other South African species having serrated margins on its leaflets.

Two rows of round, brown sori (groups of spore cases) grow near the base on the lower surfaces of some leaflets. The lower part of the frond rachis is brown from woolly hairs in picture. New fronds grow in spring.