Home » TYPES » Ferns » Blechnum tabulare
Back to Category Overview
Total images in all categories: 12,068
Total number of hits on all images: 7,363,141 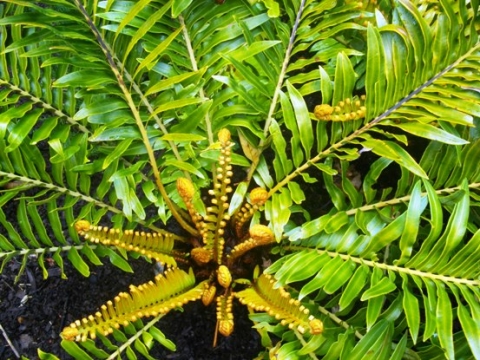 The mountain blechnum or mountain deer fern, as Blechnum tabulare is commonly known, is a large and attractive fern suitable for gardens with ample water. Blechnon means fern in Greek and tabulare refers to Table Mountain. This was where the first encounter with the plant took place that led to the recording of a scientific description of the plant, as well as the conferring of a formal scientific and internationally recognised name upon it.

B. tabulare has rhizomes covered in large surface scales. The spreading rhizomes may develop clumps of stems over time where conditions allow. The leaflets or pinnae on the large fronds are leathery, hairless on top and have entire margins. The partial unfurling of the whorl of reddish curled-in leaflets can be observed in the picture.

In South Africa the mountain blechnum grows in the Western and Eastern Cape, KwaZulu-Natal and inland in Mpumalanga and Limpopo, also widely across Sub-Saharan Africa.

The plant grows where shade and water are readily available. The species is not considered to be threatened in its habitat early in the twenty first century (www.plantzafrica.com; Wikipedia; http://redlist.sanbi.org).