Home » TYPES » Ferns » Blechnum capense
Back to Category Overview
Total images in all categories: 11,029
Total number of hits on all images: 5,676,654 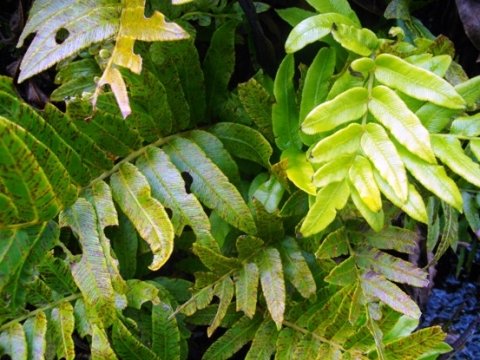 Blechnum capense is a tufted, variable fern with fronds of up to 1,3 m in length growing from a thick rhizome covered in brown scales. Branching of the rhizomes may result in crowded clumps of the plant. A dense crown of fronds may be formed on a flourishing, mature plant. The upper surfaces are fresh green, below more whitish. The leaflets growing from the central black midrib have scalloped or toothed margins.

Only some fronds are fertile; the fertile ones have leaflets spaced further apart and narrow with sori along their lengths. The sori are covered by a continuous indusium, a membrane that protects the spores.

This fern occurs from the Western Cape, Eastern Cape and KwaZulu-Natal coasts, as well as the Mpumalanga and Limpopo Lowveld to tropical Africa.

Its habitat is mainly shaded stream-banks. The species is not considered to be threatened in its habitat early in the twenty first century (Bean and Johns, 2005; http://redlist.sanbi.org).