Home » TYPES » Ferns » Blechnum australe
Back to Category Overview
Total images in all categories: 10,689
Total number of hits on all images: 5,348,958 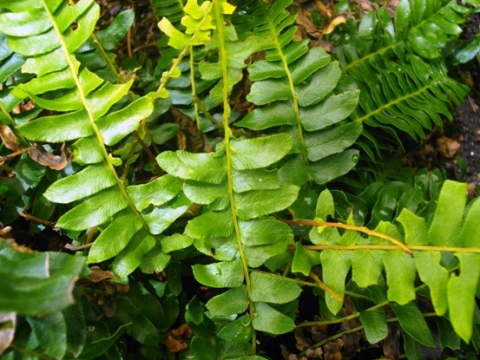 Previous
Image 9 of 38
Next

Blechnum australe has bright to dark green fronds, made up of short broad pinnae attached alternately to the rachis. The plant grows from thin creeping rhizomes that emerge above ground from erect parts of the rhizomes in tufts of fronds.

The fronds of ferns belonging to this genus are dimorphic, i.e. sterile and fertile ones have different shapes. The fertile fronds with viable spores on the lower pinnae surfaces, from which the plants are propagated, are taller than the sterile ones in this species. Pinnae end in short, sharp tips (i.e. are mucronate).

B. australe grows in semi-shade among rocks, often close to water. The species distribution is huge, ranging from most parts of South Africa to East Africa and some Indian Ocean islands, including Madagascar. It does survive in drier spots, usually at reduced size. The species is not considered to be threatened in its habitat early in the twenty first century.