Home » TYPES » Ferns » Adiantum capillus-veneris
Back to Category Overview
Total images in all categories: 11,921
Total number of hits on all images: 7,169,861 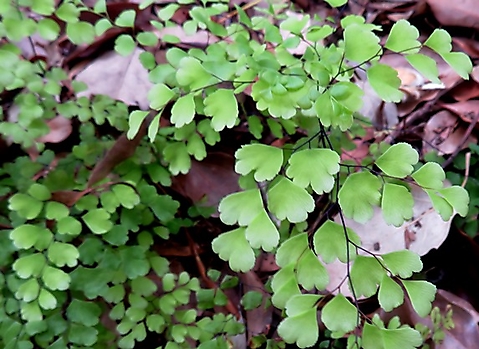 Previous
Image 1 of 42
Next

Adiantum capillus-veneris, commonly the black maidenhair or southern maidenhair fern, is a clumping fern with drooping habit reaching heights from 30 cm to 45 cm. The semi-deciduous to evergreen plant spreads via short, creeping rhizomes. The specific name is formed from two Latin words, viz. veneris, an adjective referring to Venus and capillus meaning hair, repeating Venus maidenhair, another common name of the plant.

The species is distributed world-wide in tropical and temperate regions, including all nine provinces of South Africa.

The habitat is moist, sheltered places among rocks, in crevices and on ledges, often in forests and near watercourses. The plants grow in neutral and alkaline soils in partial or full shade. The species is not considered to be threatened in its habitat early in the twenty first century.

The plant is cultivated in gardens and indoors in containers, also used medicinally (Shearing and Van Heerden, 2008; iNaturalist; http://www.missouribotanicalgarden.org; http://redlist.sanbi.org).