Home » GENERA E-F » Euphorbia » Euphorbia mauritanica
Back to Category Overview
Total images in all categories: 11,894
Total number of hits on all images: 7,136,581 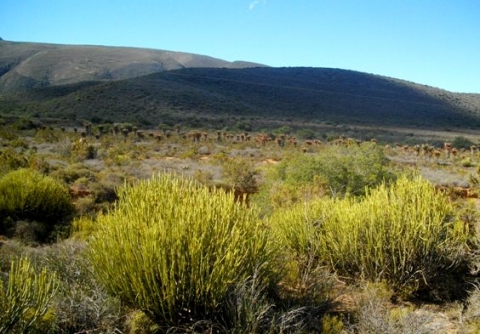 Euphorbia mauritanica distribution range is large and diverse. This plant is a versatile master of many challenges. It is a vigorous grower in most of southern and central South Africa as well as Namibia. The plant thrives in coastal and inland soils of various types and does not mind arid conditions or extremes of temperature.

The photo taken between Ladismith and Van Wyksdorp in the Little Karoo, shows some mature shrubs of the golden spurge, as E. mauritanica is widely known. A large stand of Aloe ferox beckons in the distance.

The habitat here suits the spurge very well. As farming is minimal in large tracts of this severe land unless water is available, many indigenous species such as E. mauritanica are not threatened early in the twenty first century.

The plant is sometimes browsed, but is variable in palatability and some specimens are never touched by game or livestock (Vlok and Schutte-Vlok, 2010; http://redlist.sanbi.org).