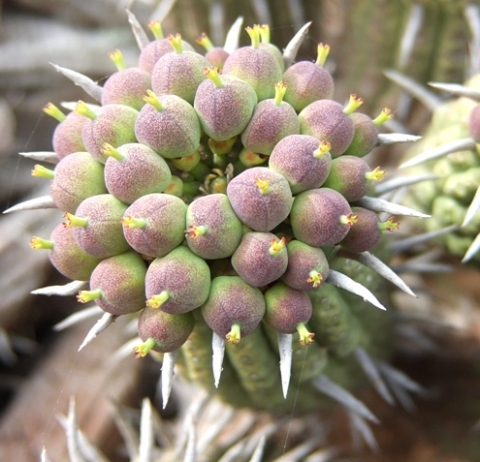 The globular green and pale purple fruit of Euphorbia mammillaris more or less cover this stem tip. On short stalks, the fruits are three-sectioned with the remains of the styles persisting on top.

For those that see the Euphorbia genus and the cactus family as “the same thing”, the common name of corn cob cactus for E. mammillaris may be fitting.

The species distributed in semi-arid veld in the south of South Africa from Albertinia to Grahamstown, is not considered threatened in its habitat early in the twenty first century. This plant, commonly also called the duikernoors, was encountered in the stony hills southwest of Oudtshoorn (Vlok and Schutte-Vlok, 2010; Wikipedia; www.redlist.sanbi.org).