Home » GENERA E-F » Euphorbia » Euphorbia mammillaris
Back to Category Overview
Total images in all categories: 12,086
Total number of hits on all images: 7,380,980 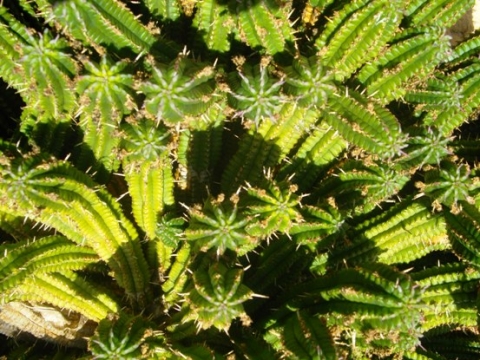 The Little Karoo, southern Cape and Eastern Cape are home to Euphorbia mammillaris. This is yet another succulent plant endemic to this part of the country.

Branching over time brings about the clump of erect club-shaped stems seen here. The height achieved is about 35 cm. When the occasional branch emerges higher up on a stem, it will also curve to point upwards.

The number of ridges or ribs on E. mammillaris stems varies considerably, usually between seven and ten, sometimes up to seventeen. The long whitish spines are the older, dried out ones; young ones are reddish. These spines are the sterile peduncles of past cyathia. They display a few tiny, scattered hooks.

This species is one of the dioecious euphorbias that have male and female flowers growing on separate plants. There are nectar guides of various colours among the cyathia. The cyathia are yellowish green; the lobed fruits on very short stalks are green (Vlok and Schutte-Vlok, 2010; www.cactus-art.biz).