Home » GENERA E-F » Euphorbia » Euphorbia louwii
Back to Category Overview
Total images in all categories: 12,086
Total number of hits on all images: 7,381,039 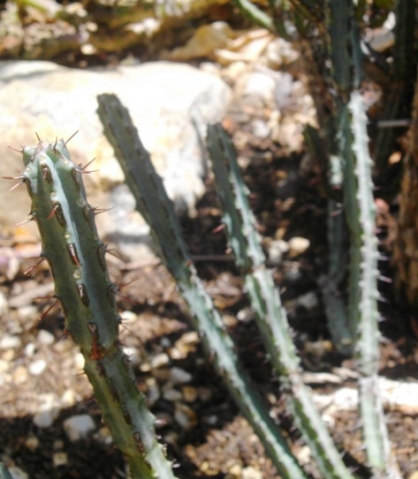 The blue-green erect and slender stems of Euphorbia louwii have five to seven vertical, dark ridges or ribs, although stems may sometimes be nearly cylindrical. Young stems are said to be green, the bluish hue appearing later. The base of the stem on an older specimen loses its colour, becoming rough with a whitish bark. The shrub reaches a height of 1 m and may branch much at the base, less so higher up.

The spine shields at the base of paired spines on the ribs are not continuous. The yellowish green inflorescence is arranged in the form of three horizontal cyathia. The involucre is funnel-shaped and the peduncle on each cyathia is short.

Although the plant is rare, it is not currently deemed to be threatened as its habitat of rocky patches in open woodland remains little affected by prevailing farming activities (www.plantzafrica.com; www.redlist.sanbi.org).