Home » GENERA E-F » Euphorbia » Euphorbia loricata
Back to Category Overview
Total images in all categories: 11,635
Total number of hits on all images: 6,752,968 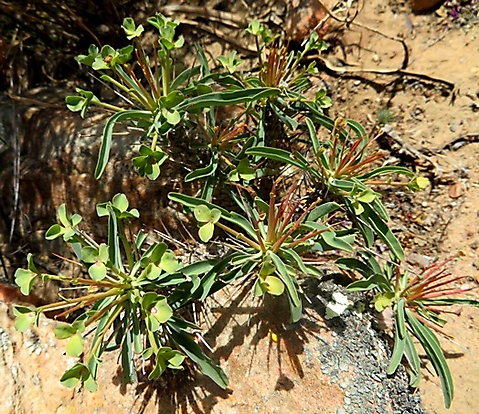 Euphorbia loricata, commonly known as the hedgehog milkbush and in Afrikaans as the doringpol (thorn tuft), is a much-branched, woody shrub occasionally reaching 1,5 m.

The short stem branches near the base and higher up into many cylindrical, pale brown stems covered in shallow tubercles spiralling up the young parts. The small plant in picture branched at ground level. Stems become about 1 cm to 3 cm in diameter.

The species distribution is in the Western Cape around the Olifants River, Clanwilliam, the Cederberg and southeast to Laingsburg, as well as northwards, slightly into the southwest of the Northern Cape. The photo was taken in the Biedouw Valley.

The habitat is arid fynbos and succulent Karoo flats and slopes in sandstone derived and clayey soils. The species is not considered to be threatened in its habitat early in the twenty first century (Grenier, 2019; Smith, et al, 2017; Frandsen, 2017; iNaturalist; http://llifle.com; https://worldofsucculents.com; http://redlist.sanbi.org).