Home » GENERA E-F » Euphorbia » Euphorbia keithii
Back to Category Overview
Total images in all categories: 11,635
Total number of hits on all images: 6,753,076 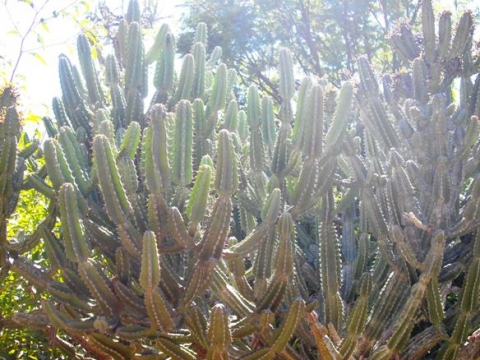 Euphorbia keithii, the Swazi euphorbia, is a succulent, spiny shrub or small tree growing up to 7 m in height.

The inflorescence of E. keithii is small and greenish yellow, consisting of up to three cyathia per cyme, positioned horizontally next to each other. The lateral cyathia of each are vertically arranged. A cyathium is a false flower that may be male, female or bisexual on the same Euphorbia plant, given the nature of the species. Groups of cyathia or flowers are called pseudanthia or flowerheads.

Each cyathium consists of bracts, in this species scale-like ones, nectar glands, an ovary and style of only 1,5 mm on a cup-shaped involucre in the case of a female cyathium. The male cyathium lacks the ovary, replaced by an anther on a stalk, 5 mm long; its small bracts 3 mm long.

The fruit of E. keithii is a three-lobed greenish red capsule of 7 mm by 4 mm on a curved stalk. The fruit appears from midsummer onwards. It contains smooth, brown seeds that are almost spherical.

This species is not found in nature in South Africa, but in the eastern parts of Swaziland, as well as possibly Mozambique. Close to the border though, it will interest the South African tourist admiring the rocky mountainsides where these trees grow.