Home » GENERA E-F » Euphorbia » Euphorbia hottentota stems
Back to Category Overview
Total images in all categories: 11,528
Total number of hits on all images: 6,611,316 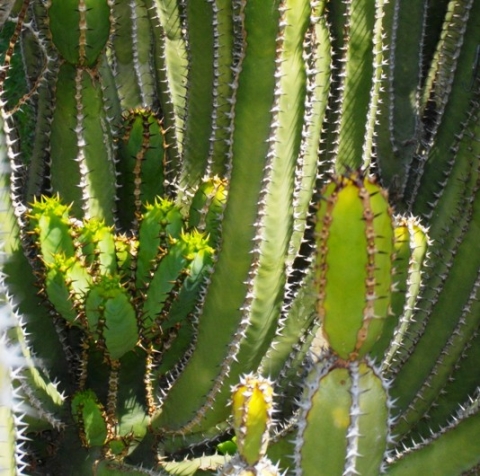 Euphorbia hottentota, the rare kandelaarnoors (Afrikaans), is found in the northern parts of the Richtersveld, close to the Gariep. The University of Stellenbosch has this thriving specimen in the greenhouse of their botanical garden.

The plant branches densely into a multitude of closely spaced erect green stems from the single central trunk at the base. It grows to almost 1,5 m in height. These branched stems are either square shaped or five sided with quite smooth flat green surfaces ending in vertical horny ridges. Pairs of short, sharp spines point outwards at short, regular intervals up these ridges. It appears if further (later) branching of the lower stems occurs only under special circumstances such as when the stem is damaged in some way. At the top of the stems the spikes are yellow-green and alive where the cyathia appear, unlike the hard and dry ones from earlier seasons lower down (Van Jaarsveld, et al, 2000).