Home » GENERA E-F » Euphorbia » Euphorbia horrida in the Walter Sisulu National Botanical Garden
Back to Category Overview
Total images in all categories: 11,544
Total number of hits on all images: 6,625,948 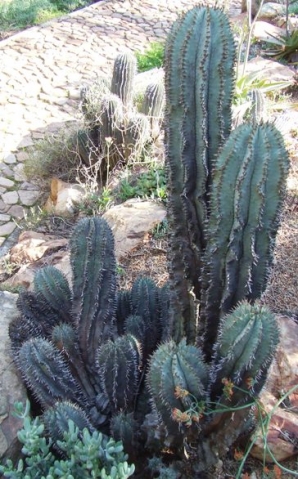 Euphorbia horrida clumps through base level branching into quite a big plant, often growing several stems. The spines are hard and hostile. They start off a pinkish colour, functioning as the new flower stems. Turning grey later when the flowers are gone, the spines persist on the hard stem ridges, assuming a protective function. Each spine has tiny branches or hooks along its length, especially noticeable in the upper parts.

Similar to the aloes of Africa, this indigenous plant and its generic relatives, the euphorbias, are often called cacti, which they are not. Embrace diversity and think of planting some of these drought-adapted species together in a rockery: cacti, aloes, euphorbias and more. This could become a private botanical United Nations, citizens from over the world in your private xeriscaped garden feature at home.

Others may favour planting indigenous. In nature there is a ubiquitous reality of every animal and plan species fending for itself. Mutually beneficial contracts in nature promote this: the bird eating a fruit and dropping a seed somewhere, the human taking seeds or cuttings, planting them in the soil elsewhere. Survival works in wonderful ways!

But herein lies the dilemma of the gardener: Plant something where nature would not and you change something, playing villain rather than God, as this often causes invasion. Conversely, do not plant anything and there will not be food production or gardens. Either-or solutions do not work for us anymore, or never did? We have to learn to do useful things requiring thought... humanity's defining attribute.