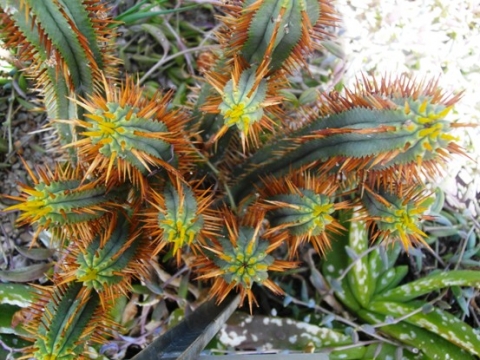 Euphorbia heptagona branches much and reaches heights around 1 m. The species is dioecious, meaning that male and female flowers occur on separate plants. The grey-green stems have six to ten ridges, the name heptagona suggesting a modus of seven. The long spines on the ridges are light brown or yellow to reddish brown when they are young on the stem tops.

This specimen was photographed at Kirstenbosch. It was marked as E. heptagona var. heptagona at the time. There used to be four more variations of E. heptagona: var. dentata, probably confined to the Eastern Cape, var. ramosa, var. subsessilis and var. viridis, but none of these varieties is still recognised.

Flowering occurs from June to September. The cyathia are green, yellow-green or reddish (Vlok and Schutte Vlok, 2010; Bond and Goldblatt, 1984; Wikipedia).