Home » GENERA E-F » Euphorbia » Euphorbia heptagona
Back to Category Overview
Total images in all categories: 11,528
Total number of hits on all images: 6,611,444 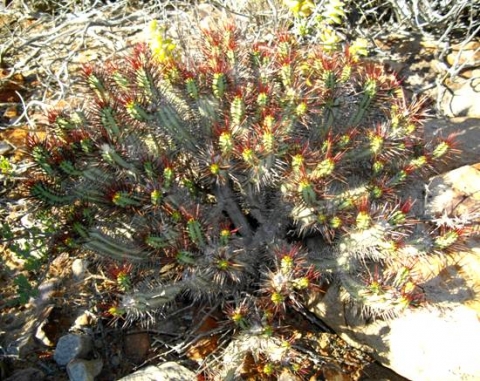 Euphorbia heptagona, the klipnoors (stone euphorbia) or donkienoors (donkey euphorbia), grows many stems branched at the base or higher up. The plant may reach 1 m in height when conditions permit, often only 30 cm in its harsh habitat. Tiny leaves are seen for a short while on new growth at stem tips only.

The distribution of the species ranges across parts of the Karoo and the Little Karoo from Touws River and Montagu in the Western Cape to Jansenville in the Eastern Province. This plant was seen end May in the Rooiberg.

The habitat is rocky slopes and outcrops among dry karoid scrub in various soils types. The species is not considered to be threatened in its habitat early in the twenty first century (Vlok and Schutte-Vlok, 2010; iSpot; http://redlist.sanbi.org).