Home » GENERA E-F » Euphorbia » Euphorbia caerulescens without new growth
Back to Category Overview
Total images in all categories: 12,058
Total number of hits on all images: 7,353,523 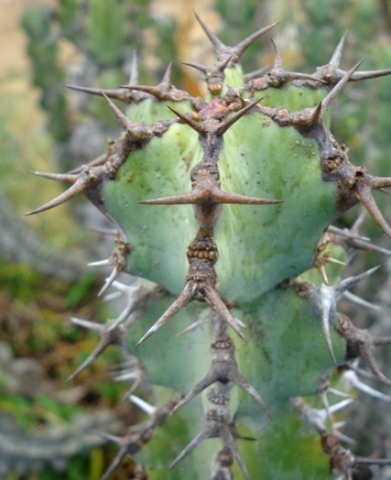 On an old stem of Euphorbia caerulescens the spines assume a daunting appearance, discouraging animals from contemplating juicy bites. As hunger grows, defences fail and the plant is browsed in its habitat that often lacks fodder for stock and game.

The dark, woody rim growing along the vertical ridges is not quite continuous between the angled spine pairs on this plant. The stem shown here has six ridges.

The constrictions on E. caerulescens stems are often fairly close together as seen in the photo, compared to those found on stems of some other Euphorbia species.