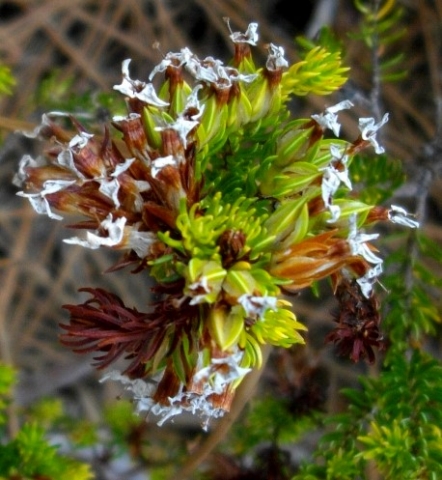 Erica walkeri, previously known as E. walkeria, is a branched shrub reaching heights over 1 m. It forms part of the Callista Section of the Erica genus, characterised by stem-tip flowers with narrow tubular or urn-shaped corollas. The corollas have lobes varying in size and the anthers are included in the tube.

The species is distributed in the southwest of the Western Cape from Ceres to Du Toit's Kloof and Swellendam.

The habitat is fynbos flats and slopes to high up the mountains. There are two varieties: var. walkeri distributed more widely is commonly known as Swellendam heath and var. praestans. Neither variety is considered to be threatened in its habitat early in the twenty first century (Bond and Goldblatt, 1984; iNaturalist; JSTOR; http://redlist.sanbi.org).