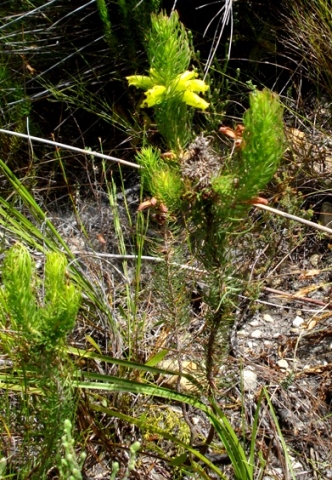 Erica viscaria, commonly known as sticky heath due to the stickiness upon the flower tubes, has at least four subspecies, viz. E. viscaria subsp. longifolia (the one in picture), subsp. macrosepala (large sepals), subsp. viscaria (shorter corollas, maybe suggesting they may be more sticky?) and subsp. pustulata (pustules, blisters or pimples along leaf and sepal surfaces). The specific name, viscaria, is derived from the Latin, viscus meaning birdlime, referring to the flower stickiness, -arius indicating possession or connection.

E. viscaria is one of the species in the Hermes section of the Erica genus, the plants being characterised by variously shaped flowers in axillary spikes and the anthers included in the corolla, i.e. not exserted beyond the mouth. E. viscaria subsp. longifolia shrubs are compact or sometimes grow tall, willowy and erect to 90 cm in height, their branches wand-like.

The distribution of E. viscaria along lower slopes and flats of the far south-western parts of the Western Cape ranges from Mamre and Paarl to around Bredasdorp; much variation occurring in a relatively small geographical distribution. Flowering seasons of these plants also vary across parts of this area. This plant was seen in the Fernkloof Nature Reserve late in October.

The habitat is fynbos slopes and flats in sandstone derived soils. The subspecies is not considered to be threatened in its habitat early in the twenty first century (Bean and Johns, 2005; Baker and Oliver, 1967; Andrew, 2012; iSpot; http://redlist.sanbi.org).