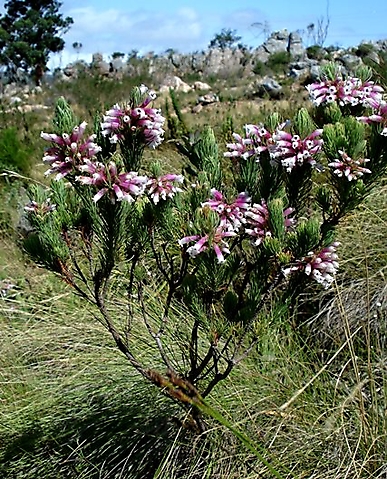 The restio-like surrounding vegetation has allowed this Erica viscaria subsp. longifolia to stand out for now. Lower, woody branches have become hairless as is common on many fynbos shrubs. Photosynthesis is best from younger leaves in vigorous upper stem growth.

The investment in maintaining less productive elements is a cost-benefit issue, decided by company boards in the case of factories. The same result is achieved in plants by a speechless, metabolic threshold of resource allocation. They are not encumbered by long table decision habits and function just fine.

Much thought and consensus evolution among people continually relegate well managed aspects of human interest issues to the automatic level. Over time this goes unnoticed by most people, freeing up capacity in human society for new challenges at the evolutionary frontiers where energy happens to be expended (Manning, 2007; Bean and Johns, 2005; Baker and Oliver, 1967).