Home » GENERA E-F » Erica » Erica verticillata
Back to Category Overview
Total images in all categories: 12,081
Total number of hits on all images: 7,379,085 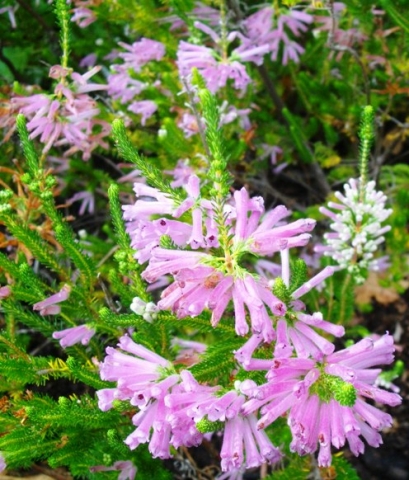 Without the conservation efforts of several generations of people dedicated to plant care and some enduring botanical gardens, Erica verticillata would have been extinct and lost forever. Conversely, without the presence of humanity the plant would have been thriving naturally in its Cape Flats habitat. As it is, Kew Gardens in London, the Belvedere Palace Gardens in Vienna, Austria, Kirstenbosch and a planting found on a site in Pretoria have seen to it that three forms of the plant, grown differently from prolonged isolation, are still alive and again multiplying, albeit mainly in cultivation.

The problem started when popular terrain with seasonal damp sandy soil from Wynberg and Kenilworth to Zeekoeivlei was diligently cleared of its natural vegetation over the last few centuries and used so intensively for human needs that the entire natural population of E. verticillata disappeared by early 20th century, just a hundred years ago!

Painstaking and skilful efforts during the 1980’s brought the limited remaining living material from three sites into a concerted regeneration that recovered the plant’s position to a heartening degree. Reintroduction into nature at Rondevlei in the Cape on a tentative basis has been achieved. Gardeners can today obtain the plant from Kirstenbosch and elsewhere for growing it more widely, enjoying it wherever they succeed and contributing to the plant's continuing existence (www.plantzafrica.com; www.unep.org).