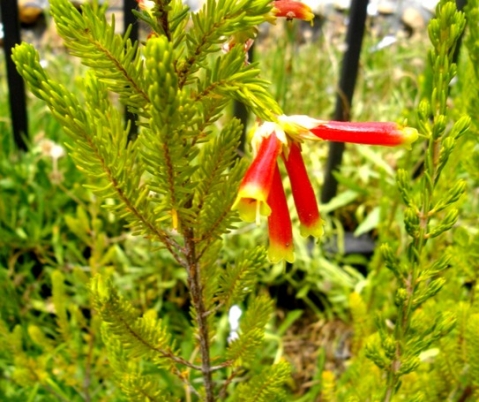 Erica versicolor is a robust shrub reaching heights up to 2,5 m. The plant may spread to 2 m in width, the growth habit sprawling or erect. Varieties of the species recognised earlier seem to have been abandoned, so expect variations among plants bearing this name.

The leaves are arranged in whorls of four and in vertical arrays, densely or spaced on the grey, woody stems, depending on the resources during the growth season. The leaves are straight or incurved and narrow, spreading or ascending upon the stems. Leaves appear in various shades of green, from dark green to yellowish green on this plant in the Stellenbosch University Botanical Garden.

The shiny red flower tube is barely curved, sometimes straight with a just discernible unevenness in girth, wider near the tip. The cream, pale yellow or whitish corolla tip may have a slight green tinge when young on its shallowly scalloped lobes. They are straight or angled slightly outward, the tubes dry or sticky.

Versicolor means having a variety of colours. In Afrikaans the species is known as tweekleurige heide (bicoloured heath). Flowers may be found on E. versicolor plants at any time during the year.

The species distribution in the Western Cape ranges from Clanwilliam to Knysna, the plants found on mountains, notably the Cederberg, the Hex River Mountains and the Langeberg Mountains.

The habitat is fynbos on sandstone mountain slopes. The species is not considered to be threatened in its habitat early in the twenty first century (Manning, 2007; JSTOR; https:finebushpeople.com; http://redlist.sanbi.org).