Home » GENERA E-F » Erica » Erica versicolor shiny and bicoloured
Back to Category Overview
Total images in all categories: 11,506
Total number of hits on all images: 6,483,621 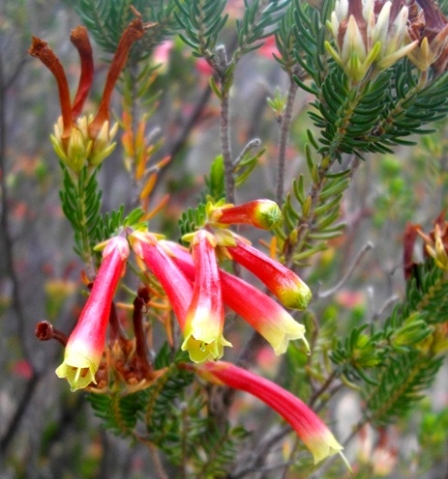 Erica versicolor flowers angle slightly down or barely nod their shiny red corollas during their prime. In browned old age they are turned up into erect positions in the photo.

Bud tips are green, the seam lines of their lobes whitish, still to part. Open flower tips are cream with a hint of yellow, the rounded lobes borne nearly straight to slightly out-curving.

It appears as if the sepals on the oldest flowers have grown some, as if protecting the fruit may require increased cover; the ploy insurance companies might propose.

Brown anthers are visible inside flower mouths, only some styles are exserted here, pressed against the upper walls of their perianths.

Leaves in picture appear in several shades of green, the orange ones likely to disappear soon. The stems lower down are bare and grey, showing regularly spaced node gnarling on the woody parts for some time (Manning, 2007; iNaturalist).