Home » GENERA E-F » Erica » Erica versicolor, an Evanthe
Back to Category Overview
Total images in all categories: 11,506
Total number of hits on all images: 6,483,559 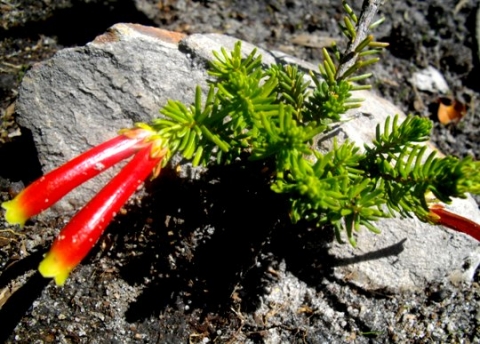 Erica versicolor forms part of the Evanthe section of the Erica genus in the book by Baker and others (1967). This is one of the 41 sections into which this vast genus has been subdivided to facilitate identification. Of the about 860 Erica species found worldwide, i.e. in Africa, Madagascar and Europe where they grow in nature, 780 are from southern Africa, while 660 species grow in the fynbos region of the Cape.

Grouping them according to the similarity patterns in plant structure provides most welcome support for mastering the complexity of the genus. After a specimen is identified with one of the sections, some challenges still exist for the student, but in a much reduced search area.

The Evanthe section of the ericas comprises around 40 species, characterised by terminal flowers with tubular corollas that are usually longer than 9 mm (Baker and Oliver, 1967; Manning, 2007).