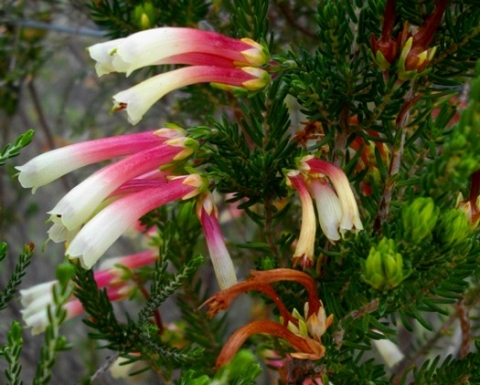 The flowers grow on slightly long purplish stalks in small stem-tip groups rather than bottlebrush style around the stems. The sepals are pale and triangular and the leaves not in tufts but vertical arrays in whorls of four around the stem. The sepals clutch the corolla base loosely with small, narrow green bracts just behind.

Most of the anthers are present close to but still inside the corolla mouth of the younger flowers. The styles and old anthers become more visible as the flowers age. The older flowers widen at the corolla tips, or their lobes start curving out slightly while they become longitudinally folded and less shiny (Manning, 2009; Bean and Johns, 2005, iNaturalist).