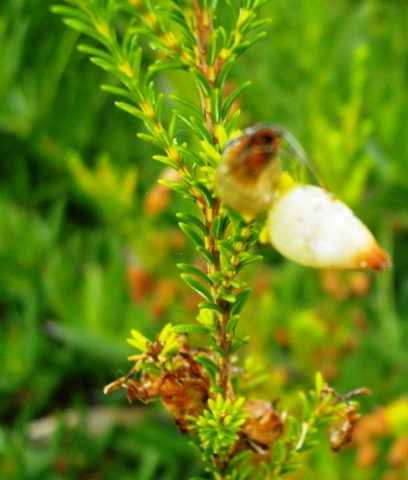 Erica urna-viridis, sticky heath or in Afrikaans groentaaiheide (green sticky heath), bears flowers that are sticky and pale green, especially when young. This Kirstenbosch plant displays fading and faded flowers. The remaining flower does not show the normal pale green but appears just about white. The urn-shape and green flower colour earned the plant the self-explanatory specific Latin name of urna-viridis.

Flowering occurs mainly in the first half of the calendar year. The plant grows to 1 m, often taller than the general fynbos of the particular habitat. The leaves are small, pale green and sparsely scattered along the stems. The plant has to grow from seed after fires, as it is not one of the species with the ability to resprout. It is also susceptible to the abnormal growth of witches’ broom that is more associated with proteas and other plant genera of the area than with ericas.

There is some doubt as to which pollinators serve E. urna-viridis.  Sunbirds and various insects, including some hovering ones with long proboscises, have been observed around the flowers. Some insects also drill or eat their way through the sides of the corolla. No damage to the ovary is apparently caused by this.

E. urna-viridis is a rare plant growing on higher fynbos slopes. It has a very small distribution that lies in the Cape Peninsula, well-known for its large human population. Fortunately, the Muizenberg Mountains between the Steenberg and Kalk Bay where the plant is found these days, enjoys enthusiastic protection from many citizens and institutions, both private and public.

The smaller the natural domain of a species, the more important non-interference in that area becomes. This plant used to occur on Table Mountain. People cannot plead innocence of its disappearance from there.

Growing this plant from cuttings is favoured over using seed, due to the difficulty of getting the seeds from the sticky flower remains (Manning, 2007; Wikipedia; http://redlist.sanbi.org).

More can be learnt about Erica urna-viridis from an informative article in www.plantzafrica.com.