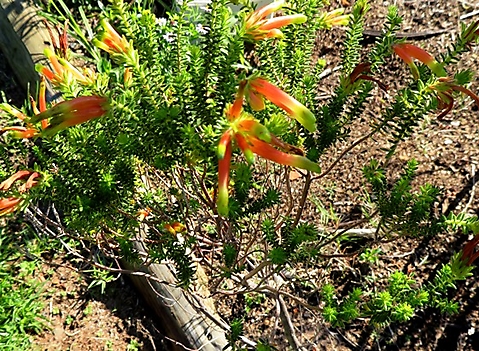 Erica unicolor subsp. mutica, previously E. dichrus, is a branched shrub reaching heights from 70 cm to 1 m. The species forms part of the Evanthe section of the Erica genus.

The subspecies distribution is range restricted in an area of the southern Cape coast near Mossel Bay, Herbertsdale and George.

The habitat is lower fynbos slopes and lowlands in sandstone, granite, silcrete and shale derived soils. The plant is considered to be endangered in its habitat early in the twenty first century, due to forestry, alien vegetation invasion and farming (Bond and Goldblatt, 1984; iNaturalist; http://redlist.sanbi.org).