Home » GENERA D-F » Erica » Erica melanthera
Back to Category Overview
Total images in all categories: 9,746
Total number of hits on all images: 4,372,908 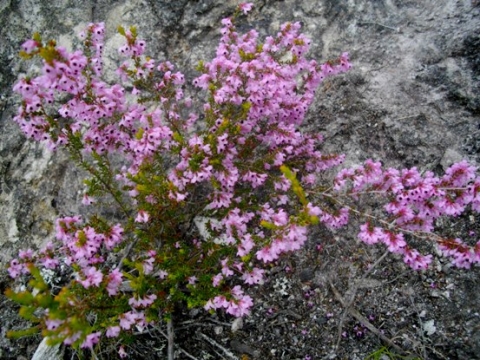 Erica melanthera is an erect shrublet growing to 70 cm in height. It does not resprout after fire. The distribution of the species lies in the Little Karoo on the Swartberge and Langeberge, as well as eastwards across the Kouga and Baviaanskloof to around Uitenhage. It grows on moist slopes of mountain fynbos.

The species resembles E. chamissonis, but lacks the long hairs on the leaves and has less hairiness on the peduncles and calyces.

This floriferous shrub was photographed in October in the Tradouw Pass (Baker and Oliver, 1967; Vlok and Schutte-Vlok, 2010; iSpot).