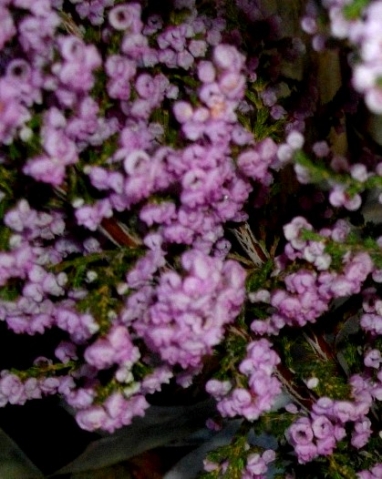 Erica mauritanica, earlier known as E. viridipurpurea, is a floriferous shrub growing from 50 cm to 1 m in height.

The small pink flowers arriving between late winter and mid-spring are terminal, their corollas dry and less than 5 mm long. The anthers are included in the corolla.

These features mean that this plant conforms to the Orophanes Section within the huge Erica genus. Subdivision into smaller homogeneous groups does help the learning about the ericas, but there are then still such a large number of little groups in the genus to contend with!

The distribution of the species is in the southwest of the Western Cape on the Cape Peninsula and around Stellenbosch. The plant grows in fynbos on lower slopes. The species is not considered to be threatened in its habitat early in the twenty first century (Bond and Goldblatt; 1984; www.redlist.sanbi.org).